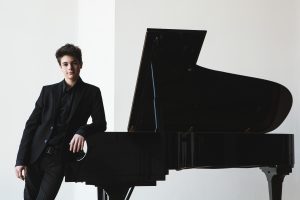 Born in Latisana (Italy) in 1995, Luca Chiandotto begins his musical study in his native city at the age of five with prof. Jessica Galetti. In 2011 he is admitted at the Conservatory “G. Tartini” in the class of prof. Flavio Zaccaria. During his music study, he attends the Scientific High School in Latisana where he graduates in 2014. In the academic year 2015/2016 he undertakes the Erasmus+ project, living in Salzburg (AT) for nine months and studying in the Mozarteum University with prof. Klaus Kaufmann. Currently he is back in Trieste, where he’s graduating in Bachelor of piano in 2017. For many years he has attended the masterclasses of professors Marian Mika, Aquiles Delle Vigne and Alessandro Taverna. He performed at recitals in several concert halls of northern Italy, such as Sala del Ridotto of “G. Verdi” Theater in Trieste, in Wiener Saal of Salzburg. In late 2016, he makes his debut with the orchestra of the Conservatory of Trieste conducted by M° Romolo Gessi, playing Mozart Piano Concerto in A major KV 414 in four dates. Since 2012, he becomes the second prize (first prize not awarded) in Interfest of Bitola (MK), the second prize in Città di Albenga competition , the first prize in Accademia Musicale Romana competition in Rome and the first prize in Premio “Filippo Trevisan” competition in Palmanova. Moreover, he won the “M. G. Fabris” competition in Trieste.

Kostandin Tashko, born in 1997 in Tirana, Albania has recently completed his High Musical School Studies at the Liceu “Jordan Misja” of his home town. Now he studies at the Music Conservatory “Giuseppe Tartini” of Trieste-Italy, in the class of Teresa Trevisan, after passing the admission exam to the Bachelor with 100/100. Despite his young age, Kostandin has already performed in some of the most important venues and festivals in Albania, such as the University of Art in Tirana (for the 65th Jubilee of the Jubilee High School), the National Theatre, the Opera House ( “Europe Day” organized by the Embassy in Tirana) the Tirana Pianodrom Festival (2013). In 2013 he was invited to perform the Chopin Concerto op.11  with the National Television Orchestra: he also performed at the  ARTEVE the piano concerto by Cesk Zadeja. In 2015 he was invited to give a recital  for the Chopin Society in Prishtina, Kosovo. In November 2015 he premiered at the festival Pianodrom the Sonata No. 3 “Skanderbeg, work by the Albanian composer Aleksander Peci, then revived in Pristina, Kosovo. In 2016 he performed a recital at the Government Palace of Albania (June 27th). He was awarded some first national prizes at “Tirana Talent” (2011), EPTA-Albania (2007, 2011,2013), “Chopin Piano Competition” (2010) and “Città di Palmanova” – Premio Filippo Trevisan (Palmanova, Italy 2014). Other awards at International Competitions are : International Music Competition “Ars Nova”  in Trieste, Italy (2012 1st absolute prize), International Piano Competition “Città di Gorizia”  (2012 1st absolute prize in Gorizia-Italy), International Piano Competition “Interfest Bitola” (2012 1st absolute prize in Bitola, Macedonia), International Piano Competition “ Chopin Golden Ring” (2nd prize 2012 in Radovljica, Slovenia), International Piano Competition “Young Virtuoso” 5th prize (2014 in Zagreb, Croatia). In 2014 Kostandin was also selected to participate at the prestigious “Ettlingen International Piano Competition for Young Pianists” (Germany). In 2017 he was awarded the 1st prize absolute (100/100) at the VIII International Young Musicians Competition Premio “Antonio Salieri” and the XXIV National Piano Competition “Giulio Rospigliosi”. Kostandin attended some masterclasses with renowned teachers such as Heribert Koch (Germany) 2009; Serban – Dimitrie Soreanu (Romania) 2010; Michele Rossetti (Italy) 2010; Bożena Maciejowska Banaszkiewicz (Poland) 2010; Claus – Christian Schuster (Austria) -2011, Bernhard Poetsch (UniWien 2017), Rita Kinka (Novi Sad Academy 2017), Kristina Petrollari Laco (ARTEVE Tirana 2017), Payam Susanni (Yasar University of Izmir 2017).
For his commitment and talent, in 2012  Kostandin was given a scholarship to participate at festival “Primavera pianistica in Antwerp, Belgium with Andreas Weber and Aquiles Delle Vigne. As a student in free attendance in the piano class of Teresa Trevisan, in 2013 he also took part in several Erasmus seminars organized at the Conservatorio “Giuseppe Tartini in Trieste with Rosella Clini (Conservatoire Royal de Mons-Belgium) and Paolo Susanni (Yasar University-Izmir). In September 2013 he passed the piano exam B -2 piano with the result of 10 “with distinction.”

By continuing to browse the site you are agreeing to our use of cookies.